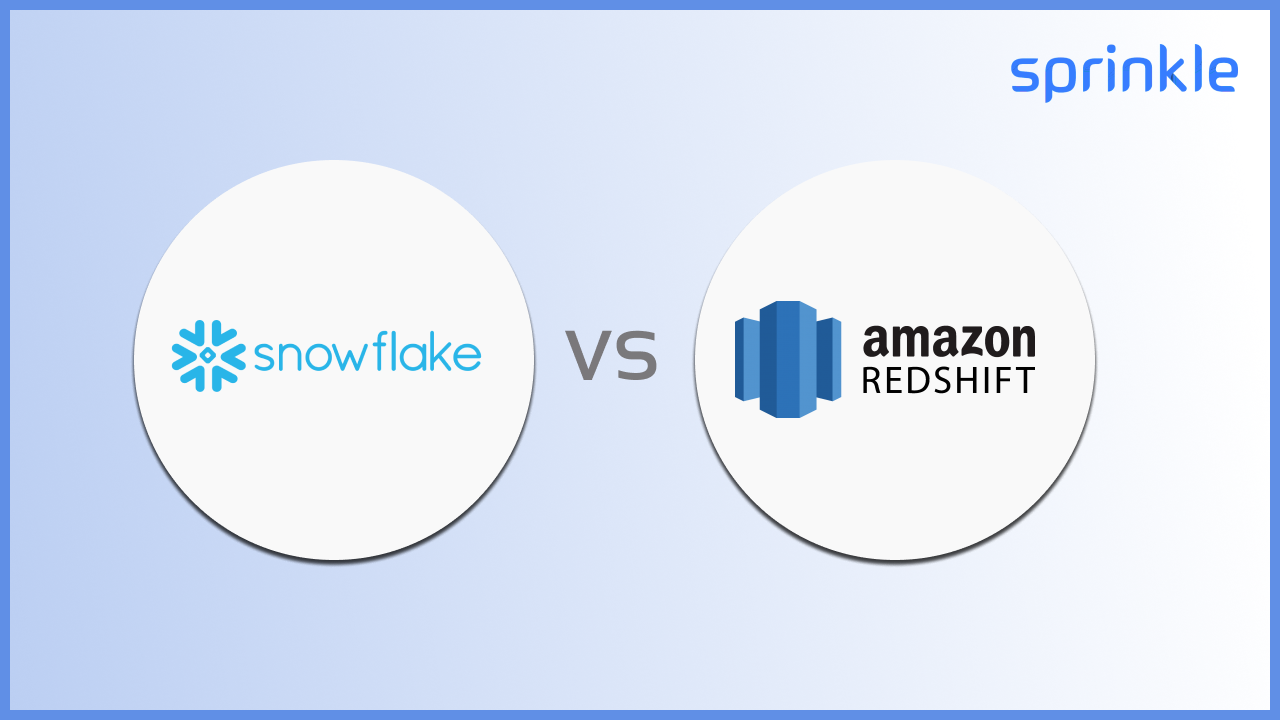 Snowflake Vs Redshift : A Complete Comparison and Guide

Data is the new oil, however virtual it might be, it proves to be the core even for petty businesses to the biggest of internet enterprises. Accumulation of data peaked as enterprises aspire to keep track of their data for analytics and record purposes.

The global big data market is forecasted to grow to 103 billion U.S. dollars by 2027, more than double its expected market size in 2018. With a share of 45 percent, the software segment would become the large big data market segment by 2027.

However, in order to keep a proper track of these mighty volumes of data, a proper data warehousing solution must be in place. A data warehouse assists users in the accessibility, integrations and more importantly on the security front.

This write up mainly focuses on the best in class data warehousing solution, a detailed comparison on Snowflake vs Redshift.

In order to understand the differences between Snowflake and Redshift, we have to study the pricing, security and the integrations, performance and their maintenance requirements.

When it comes to the on-demand pricing, Amazon’s Redshift is less expensive than Snowflake. Adding to this, Redshift allows you to save in addition to the on demand rates with their 1 year/3 year reserved instance customer pricing.

Redshift’s pricing is based on two factors, the total number of hours and the total number of clusters. There is a standard hourly pricing as per Redshift which is common for all users. But the size of the clusters differ with businesses which happens to be the differentiating factor in the overall pricing. There is Redshift’s pricing scale based on the size of clusters, much like a pricing chart based on the cluster size. So, the overall pricing per hour is calculated by multiplying the size of the cluster with the standard pricing per hour.

Redshift and Snowflake offer 30% to 70% discounts for users who pre pay for their product.

Snowflake is a bit more expensive than Redshift as it charges separately for warehousing and computation. However, when customers avail reserved instance pricing through Redshift, the total expense margin drops considerably when compared to Snowflake.

Data security is the most crucial aspect when it comes to warehouses. In this modern age, with technology growing incessantly, the security systems have been put up with a lot of scrutinising and yet, security breaches happen. This commonly happens when the login credentials are shared over social media to fellow employees or lack of two factor authentication could also pave the way for breaches.

As these data are obtained from various open source platforms, it consists of a lot of sensitive information, say, transaction details, customer information, etc. In this modern technological age, the amount of data pulled is far more than the volume of data that is actually secured. This is where data warehouses made the best of void in the market by fitting themselves in with top notch security features.

Snowflake and Redshift grew to be the leaders in cloud based data warehousing systems with their ability to scale data quickly and also in a secure way, let’s dive deep into the security features

The sign in credentials for Amazon’s Redshift management platform is managed by AWS account credentials as all the features come under Amazon’s web services. However, in Snowflake the site access is gained through blacklisting and whitelisting of IP.

With Amazon’s Redshift, credentials for other users are provided by associating cluster security groups with a cluster. Adding to this, data encryption to the user created tables can be enabled while launching the cluster itself.

Snowflake’s schema allows you to enable multi-factor authentication and single sign on for parent accounts. But this is not the case when it comes to Amazon’s Redshift, the entire operation is handled with AWS’s credentials and access management accounts.

Loading data in Redshift comes in two types, server-side encryption and client-side encryption. The decryption process is taken up transparently when you load data from server-side and decrypts the data as it loads the table when done from the client-side. Data is always on a transit within the AWS cloud and to protect it, Amazon Redshift uses hardware accelerated SSL which helps to copy, backup and restore data.

Integrations are one key factor users consider before opting for a data warehousing system. Data is complex, it doesn’t come in hand with the use of just one technology to study or visualize your data. This is why integrations play a vital role in data management.

Maintaining your business’s data and data management system is essential. However, the process becomes challenging with Redshift as it involves a lot of complexities to be understood and dealt with. Whereas with Snowflake, the process of vacuuming and analyzing becomes easy with its ability to switch data between compute and storage.

If your business works with a lot of Amazon products or services, it would be sensible to build Amazon ecosystem in which the integration can be made easier, say, DynamoDB, Athena, Kinesis Data Firehose, EMR, SageMaker, Glue, Database Migration Service (DMS), CloudWatch Schema Conversion Tools (SCT), etc.

These above mentioned data warehouse architectural systems find it hard to work along with Snowflake when compared to Redshift. However, Snowflake on the other hand provides terrific integration options with Informatica, IBM Cognos, Qlik, Power BI, Apache Spark, Tableau, etc.

However, when businesses hugely rely on JSON storage then Snowflake certainly has an upper hand over Redshift. The in-built architecture and Snowflake schemas allows users to query and store easily whereas with Redshift, spilitage of queries results in strained processes.

Maintenance could make a major difference when selecting a data warehouse if your business doesn’t have a dedicated analyst spending hours on the data maintenance operations.

Scaling up and down i.e. switching compute data warehouse or resize with Snowflake can be done in a matter of seconds whereas with Redshift, scaling up and down is hard and takes a lot of time. The reason behind this is that compute and storage are separate, so naturally it doesn’t have to copy any data to scale up and down, data compute capacity can be switched at will.

After a series of transformations i.e. updates or deletes, Redshift requires the administrator to do the clean ups which is popularly known as vacuuming. This is not the case when it comes to Snowflake, it requires no maintenance of such sort. Redshift’s Vacuuming process is well documented in this post.

Although Snowflake and Redshift are the two best performing data warehouses in the market, they do have their own functional differences and matches. They both leverage massive parallel processing which enables computing in a simultaneous manner, columnar storage and keeping up the jobs within a specific timeframe.

But the key difference is that Redshift generally takes a longer time for query optimization but as these queries are run repeatedly and on a daily basis, they tend to be faster. This isn’t the case when it comes to Snowflake, it offers a much better performance with raw queries.

Have you decided yet? Which is the data warehousing platform for you?

Finding the best data warehousing platform involved a lot of check boxes to be ticked, say, security, integrations, fault tolerant, auto backup, speed, performance, etc. The integrations are based on your ultimatum with the data you possess, whether it’s for analytic visualization purpose, data transformation purpose, etc.

Both Snowflake and Redshift provide really good integrations to your data but the decision solely depends on what kind of integration would help your business scale.

Every individual who uses technology for their benefit would be generating 1.7 megabytes of data every second by 2020, which means a total of 40 Zettabytes. This includes internet users who generate 2.5 quintillion everyday. What stops you from having a data management system on your own, click here to visit our site to understand your business and the data it generates.