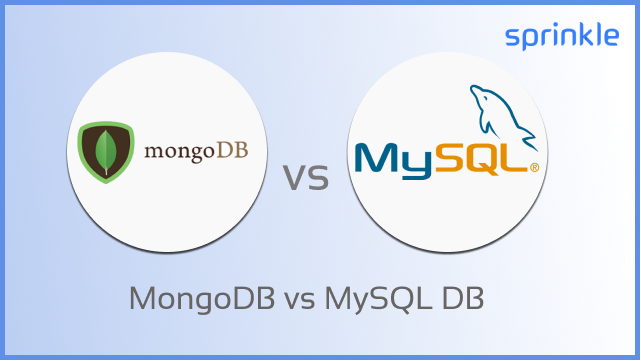 ‍MySQL and MongoDB are two of the most widespread databases used to store and manage data. MySQL is a relational database management system (RDBMS) based on Structured Query Language (SQL) whereas MongoDB is a NoSQL database system that uses documents, collections, and key-value pairs to store and manage data. Both databases have their own strengths and shortcomings, and each is better suited for different types of applications. This article will provide an overview of the characteristics and capabilities of each database and explain how they vary from each other.

MongoDB is a document-oriented NoSQL database that is used to hold data across numerous servers and is designed to provide high performance and scalability. It uses documents and collections to store data in a more efficient and flexible way than traditional relational databases proving to be a great choice for applications that need to store large amounts of data and require quick access to that data. It also offers powerful features such as full-text search and sharding, which provide great scalability and performance to its users. With its user-friendliness, MongoDB is an ideal solution for users that need to work with a large amount of data.

MySQL is an open-source relational database management system (RDBMS) that is used in a wide range of applications, from small websites to large corporate applications. It is the world's most popular open-source RDBMS and is widely used for web applications and content management systems and is highly reliable, secure, and fast, providing users with a wide variety of features and tools to meet their data storage needs.

In the next section let us understand how MongoDB and MySQL differ from each other depending on various factors:

A database model is a logical structure of data and relationships between the data. It is used to describe how data is stored and accessed by a database management system. The most common models are relational, hierarchical, and document-oriented models.

‍MongoDB is a document-oriented NoSQL database while MySQL is a relational database.

MongoDB and MySQL both use popular data representation formats. MongoDB uses a document-oriented format that stores data in JSON-like documents with dynamic schemas. It is designed for scalability and high performance, making it ideal for applications that require large amounts of data to be stored and accessed quickly.

MySQL is a relational database management system that stores data in form of related tables joined through unique identifiers. It is used in many applications, from simple websites to complex corporate applications.

MongoDB is an open-source, document-oriented database that is free to use, although paid versions are available for additional features. MySQL is a popular relational database management system that offers several paid versions with different features, depending on the user’s needs. It also offers a free version but with fewer features than the paid versions.

MongoDB offers three editions and has three pricing plans for the editions:

The pricing plans along with the price are mentioned below:

MySQL has a vast and active community of users and developers, with over 8 million downloads and 1.5 million installations all over the world. The MySQL community has over 1.7 million members and over 5,000 active contributors. The MySQL Community Forum has over 6,000 members and 64 User Groups across the globe. Over 2,200 companies have contributed to the MySQL source code.

Overall, MySQL has a strong and vibrant community of users and developers that continues to grow and support the platform.

MongoDB has an incredibly active and engaged community of users and developers. As of April 2020, the MongoDB Community Forum has over 1.1 million posts and over 1.2 million members. MongoDB also has a thriving user group network, with groups in over 370 cities worldwide.

MongoDB and MySQL both offer a variety of options when it comes to scaling. MySQL offers the ability to scale vertically, by adding more RAM, CPUs, and storage. In contrast, MongoDB offers both vertical scaling, by adding more RAM and storage, and horizontal scaling, by sharding the data across multiple nodes. MongoDB also offers auto-scaling, which allows it to automatically adjust the number of nodes in the cluster as the workload increases or decreases.

MongoDB and MySQL are both popular database systems, and there are no significant differences between the two when it comes to security. MySQL is a traditional relational database system that provides a comprehensive security system that ensures data integrity and supports authentication, encryption, and access control. It provides user authentication that involves validating user credentials, such as usernames and passwords, to ensure the user can access the database.

MongoDB is a NoSQL database system that stores data in collections and documents and provides Role-Based Access Control (RBAC) that allows administrators to define roles and grant or revoke access to specific resources.

For organizations to opt one out of these two data sources it totally depends on their business requirements.

MongoDB offers faster query times and requires less disk space for data storage. It is relatively easy to use and requires fewer lines of code to work with. MySQL is known for its ability to handle large datasets and handle concurrent connections with ease.

MySQL's CPU consumption is better than MongoDB, allowing for complex queries to be executed efficiently in limited conditions.

MongoDB and MySQL are both popular database systems, but they handle transactions differently. MySQL is a relational database system and supports ACID (atomic, consistent, isolated, and durable) transactions. This means that changes to the database are stored in transactions and are either all committed or all rolled back.

MongoDB is a document-oriented database and does not support ACID transactions. Instead, MongoDB uses atomic operations to ensure data integrity, meaning that each operation either succeeds or fails and does not partially commit or roll back.

Both MongoDB and MySQL provide powerful data storage options, but the differences in transaction support should be taken into account when selecting a database system.

MongoDB and MySQL differ significantly in their approach to data replication. Replica sets are designed to maintain data redundancy and ensure that data can be read from any server in the set.

MySQL uses master-slave replication, meaning that a master MySQL server is responsible for writing data and replicating it to multiple slaves. This approach ensures that all data is updated across all servers.

MongoDB, on the other hand, uses a replica set, which consists of several servers that all contain the same data. Additionally, MongoDB enables users to set up a priority system so that certain nodes are preferred for reads and writes. This feature of MongoDB is beneficial for better performance and availability.

MongoDB uses a dynamic indexing scheme, while MySQL uses a static indexing scheme. This means that in MongoDB, indexes can be created on any field in a document, while in MySQL, indexes must be created on predefined fields. MongoDB’s indexing technology is based on B-trees, which allow for efficient access to documents. It also supports the creation of compound indexes, which can be used to index multiple fields within a document simultaneously. This makes it easier to search for information stored within a single document. MySQL, on the other hand, uses a hash indexing system, which is not as efficient as MongoDB’s B-tree system. Additionally, MySQL does not support compound indexes, making it much more difficult to search for information stored in multiple fields.

MongoDB and MySQL differ significantly in their indexing capabilities.
‍

When to use MongoDB?

When to use MySQL?

MongoDB and MySQL are both popular open-source databases that offer powerful and reliable data storage capabilities. Each database has its own strengths and weaknesses and should be chosen based on your specific use case.

Both MongoDB and MySQL offer robust and secure options for data storage and should be used to ensure the success of your application.

If you wish to integrate data from MongoDB or MySQL or both then a no-code data pipeline and analytics platform like Sprinkle Data should be chosen to unify all your data in a single place.

MongoDB is generally faster than MySQL when it comes to data read and write operations due to its document-oriented design and faster query processing.

MongoDB is a good choice for large datasets as its document-based model is designed to scale with large volumes of data easily. It is well-suited for more complex queries than many other NoSQL databases and can be used to analyze large datasets efficiently.

MongoDB is a popular choice for many companies. According to MongoDB's website, it is used by over 35,000 organizations across the world, including many Fortune 500 companies.