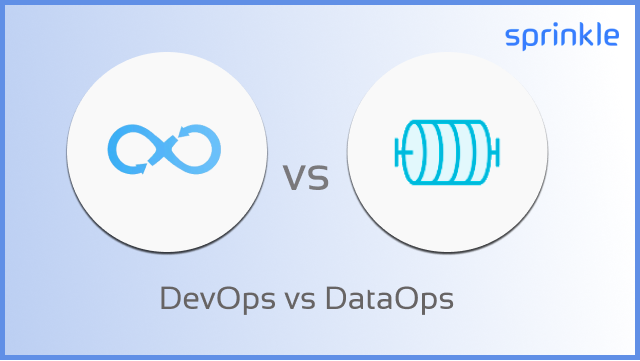 Throughout the years, DevOps has proved to be a successful practice in optimizing the product delivery cycle. As years passed by and as enterprises throughout the world focused on building a data-driven culture, it was necessary to build it in a proper manner to reap the most benefits from one’s business data. Instead of optimizing with mere assumptions and predictions, these business data provided users with factual insights for best decision making.

Before we dive deep on how different DataOps is from DevOps, let me clue you in with a crisp explanation.

DevOps is the transformation in the delivery capability of development and software teams whereas DataOps focuses much on the transforming intelligence systems and analytic models by data analysts and data engineers.

DevOps is a synergy of development, IT operations, and engineering teams with the main idea to reduce cost and time spent on the development and release cycle. However, DataOps works one level further. It’s nothing but dealing with Data. The data teams work with teams of various levels to acquire data, transform, model, and obtain actionable insights.

This consistent collaboration between the teams helps in continuous integrations and delivery with automation and iterative process in workflows.

Similar to how DevOps transformed the way in which the software development cycle works, DataOps is also changing the primitive practices of handling data by implementing DevOps principles.‍

The workflow of DevOps and DataOps

Data and analytics closely deal with integrations, business, and insights whereas DevOps practices are mostly about software development, feature upgrades, and deploying fixes. Although they are different by far, when it comes to dealing with the element they work with, the core operational strategy is pretty much the same.

DataOps is not very much different when compared to DevOps, for example, the goal setting, developing, building, testing, and deploying are part of the DevOps operations whereas, in DataOps, goal setting, gathering resources, orchestrating, modeling, monitoring, and studying are the steps involved.

The principles involved with DevOps and DataOps

DevOps is often claimed to be a pattern of collaborative learning. This collaborative learning is enabled by short and swift feedback loops which is much more economical than the primitive methods. This structure and discipline in consistent sprints are facilitated by applying Agile principles across the organization.

When it comes to DataOps, Data happens to be that differentiating element although both the practices use Agile methodology. In few instances, the sprints might go on and the desired outcomes couldn’t be developed over a period of time due to disparate teams, few processes might be stagnant before reaching out a tester or the person who deploys it.

Minimizing the steps from the feedback loop and the delivery cycle is basically a reflection of the proper real-time connectivity within teams. The real-time cross-functionality between teams helps with real-time operations like feedbacks, goal setting, etc.

However, when dealing with data acquisition, Lean principles happen to be the best way to extract the more out of your business data. A process control strategy where the acquired data is put under a series of quality checks before modeling. Any data anomalies that disrupt the flow in such operations need to be filtered out so that it wouldn’t damage the end-users confidence in data and the insights they observe.

This makes DataOps a logical successor of the DevOps initiatives as it inherits the Agile & Lean benefits for people who deal with Data.

A brief differentiation between DevOps and DataOps 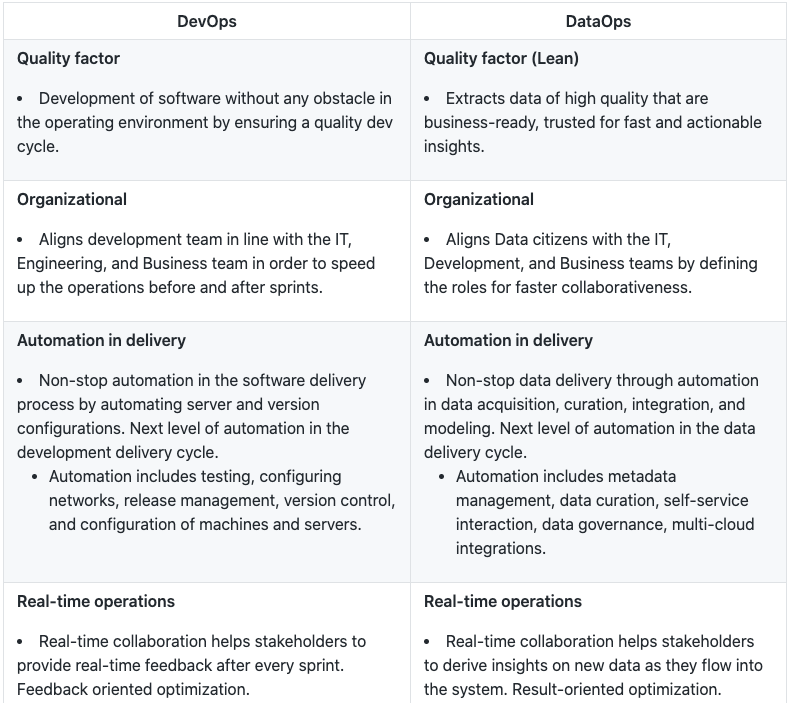 Everything you need to know about DataOps and its functionalities