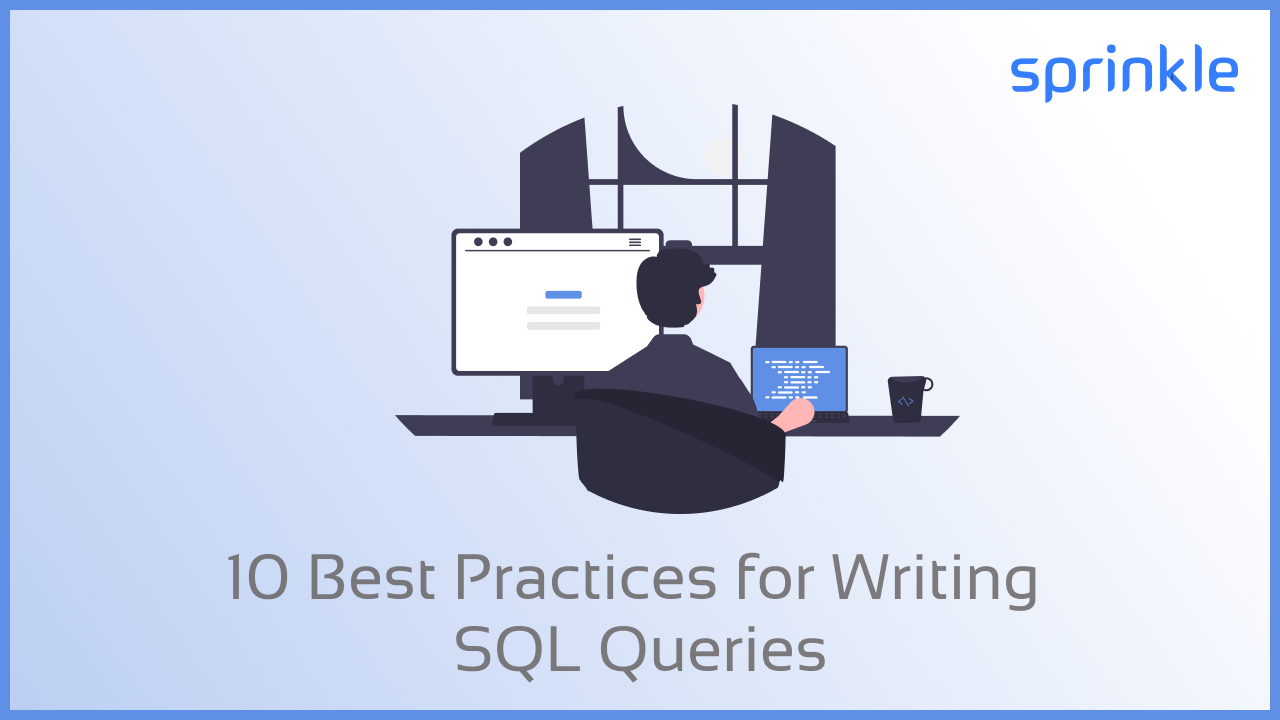 In the modern era, every individual knows the value of one’s data which includes personal details, financial information, biometrics and so on. Now, we are in the stage where we have a huge amount of data and to get the information out of it, it must be in an understandable format. To accomplish this task, different technologies/tools/languages are being used by the tech giants. One of the most widely used languages is SQL which is used by almost every company to manage RDBMS with other similar managing technologies and sometimes it is used alone.

There are various practices of writing SQL which make a developer’s life easier during data transformation, manipulation, querying the data and in many other ways. So, today in this blog you will get to know one of the most basic tips and top 10 best practices which should be implemented while writing SQL which helps in reading and understanding the glimpse or logic behind the written code. So, let's get into it.

Using a good editor such as VS Code, Sublime Text, Notepad++, etc. or the Query Editor of that particular SQL provider like MySQL Workbench, MS SQL Server, etc. Benefit of using these is different features are provided such as coloured keywords, syntax highlighting, Intellisense, autocomplete like features which also help in error spotting, increasing the efficiency of the developer and he/she can completely focus on the logic. Some examples are as follows:-

2. Using uppercase for every keyword and it should start from the new line

Using uppercase for every keyword and it should start from the new line followed by the condition, table_name, etc. which make it more clean and readable. Enough spaces can be provided to segregate the part of the query if it contains multiple conditions such as in CASE WHEN statements or with multiple logical operators if they are used with a WHERE clause.

3. Must have a knowledge of order of execution of statements

Must have a knowledge of order of execution of statements in SQL which are being used with their respective keywords which further helps in reducing the wrong results and working on the same query more number of times. Order is listed below:-

4. Must know the difference between the keywords and their use case

Must know the difference between the keywords and their use case like which keyword should be used along with another keyword and also when to use it. This also helps in getting an unsatisfying result. (For example:- WHERE and HAVING clause)

5. Should use the inbuilt functions

Should use the inbuilt functions provided by the SQL itself rather than implementing it during the various operations. (For example:- string and date). This is beneficial for reducing the brainstorming on basic implementation and obviously time and effort.

Making queries time-efficient plays an important role in getting the results when we have a large number of records. There might be a case that the time consumption of nested queries is greater than that of queries made by using joins.

The reason behind this is that the EXISTS process exits as soon as it gets the value that is to be searched whereas the IN operator iterates the whole table which in turn increases the time duration of the query which is being executed in the due time.

Using column aliases is one of the most used practices for writing SQL. Sometimes, column_name is not according to the format which is understandable to the user and can be rectified by using this tip. Moreover, using aliasing is a must while adding aggregations as SQL doesn’t give names to them by itself or they aren’t meaningful.

Using table aliases vanishes the ambiguity if it arises during the join of two or more tables containing the columns with the same name in different tables and also allows us to differentiate the columns as well on the basis of the table.

Use Equals (=) Operator instead of LIKE operator in the case of Strings matching if exact is needed. It uses index based columns which is rather faster than the LIKE operator. Else, LIKE operator can be used for wildcards matching.

When we talk about databases or managing data, the word “SQL” can be heard from every developer whether they have a Data Science background or they hold a position in the development field. The above-listed practices or ways can be implemented to optimize code to increase its level of quality which somehow helps in one or the other way while working with the team to match the level of one’s understanding and to finish the given task in the due time.

Top 5 books for data analysts and data engineers in 2022